Performers, politicians and athletes from around the state gathered for a ribbon-cutting ceremony at Mountain View’s newest community center Thursday afternoon.

But it was the performers who stole the show. 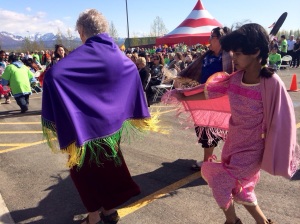 Speaking to the assembled guests, Sullivan said the sports center is a sign of things to come.

“Mountain View is a community on the rebound,” he said. “It’s taken a lot of people to make that happen.”

The Special Olympics center and recent affordable housing projects were already boosting business in nearby Glenn Square, Sullivan said. Bass Pro Shops is in the process of constructing a 100,000 square foot store; the first in Anchorage. The growth would have a ripple effect throughout the neighborhood, Sullivan said.

“A little investment in a community can go a long, long way,” he said.