At Juba Halal Market, Mustafa Ali knows most of his customers by name, or at least by face.

He prides himself on selling them the kinds of things they can’t get anywhere else. In his shop, they can find aromatic black seed oil and bags of goat meat and bright embroidered garments called dashiki. There are shelves of canned and dry goods, pungent bricks of incense bundled in plastic wrap and a back room stocked with perfumes from hard-to-find foreign brands.

Sitting under a plastic cover on the counter is a sticky, gelatinous block of halwa, a Somali candy made from sugar, oil, nutmeg and cloves. A cake knife on the tray is coated with jiggling bits of the bright red sweet.

Ali’s products are halal; permissible to consume under Islamic law. Since he first went into business in 2009, he’s seen Anchorage’s immigrant population grow steadily, and his shop offers familiarity and comfort food from behind a shabby storefront on Mountain View Drive. For the most part, his customers are recent newcomers or long-term transplants from African and Middle Eastern countries.

The market is open seven days a week, 365 days a year. The sign is small and nondescript, but Ali—who hails from Somalia—draws customers through his door with the tastes and smells of home; empathy and advice on everything from job opportunities to cultural differences to dealings with the law.

People greet him with a smile or wave when they walk through the door. They stay to chat or make small talk at the register, occasionally tempted by the offer of something special; an herbal tea supplement rumored to lower blood pressure or a particular cut of meat.

Many of the market’s customers come from the surrounding areas, and Ali himself both lives and works in Mountain View. On the outside, the neighborhood seems to morph with each passing season, molded by nonprofit and corporate investment. Scattered site housing projects peppered the streets with residential construction. Cook Inlet Housing Authority (CIHA) invested millions buying up land and building new homes. Old structures disappeared; so did many of the neighborhood’s vacant lots.

Inside Juba Halal, change comes at a much slower pace.

Ali and his wife, Umulkher Samatar, run their store without help or profit. He holds down a second job to pay bills and keep the family business afloat; she works long hours at the market while simultaneously raising their first child. Still, Ali remains optimistic about future success.

“It definitely will happen,” he said one spring afternoon, packing bulk turmeric into individual packages stacked neatly across his front counter. “We are working hard, and we hope to get better and we want to contribute to the growth of this neighborhood.”

The door opened, and Samatar arrived with their young daughter. While the little girl played, her mother set to work restocking coolers and shelves. Besides her work has a mother and partner in the family business, Samatar is an advocate for Anchorage immigrants, helping new Alaskans settle in and learn the ropes. The halal market is the place where they come together, she said.

‘This is a good place’

Behind the counter, Ali dusted golden yellow turmeric dust off his hands and spoke about his hopes for their community as he worked. When he founded his market six years ago, he said, his was one of the first Somali families in Anchorage and he saw an opportunity to provide something important for his people. They would need ethnic food and a place to meet, so he opened his first halal shop in a space off Northern Lights Boulevard.

Anchorage saw an influx of new residents from African and Middle Eastern countries. Between 2013 and 2014, according to Catholic Social Service’s Refugee Assistance and Immigration Services, Alaska’s largest village welcomed 55 Somali refugees and 16 from Sudan, as well as people from Iraq, Iran, Ethiopia, Nepal and Bhutan.

As the city’s immigrant population grew, the shopkeeper’s role became increasingly important. “Many people came north frightened and confused. You could see it in their eyes,” Ali said. The Last Frontier was a big, new, different place, thousands of miles away from home. For some, it was terrifying.

Ali’s customers live in Mountain View and Muldoon and Fairview, and he needed to be closer to them. He set his sights on Mountain View, and he spent a long time looking for just the right spot to relocate. It wasn’t easy. Commercial space options were limited, and therein lay the rub.

“That’s why Anchorage is the way it is,” he said. “There isn’t enough space available.”

Commercial real estate remains in high demand citywide, according to Anchorage-based research and analysis company Reliant LLC. In Mountain View, the remaining available space falls into several sparse categories. On the other hand, the retail trade sector continues to see a “strong growth trend,” adding 650 jobs year-to-date compared with 2014, according to the Anchorage Economic Development Corporation.

If there was more space for small businesses and local retailers, Ali mused, there could be more opportunity for long-term economic growth. What if North Bragaw Street was transformed into a commercial corridor? Ali pondered the potential.

It could mean steady, long-term jobs for neighborhood residents and self-reliance for aspiring local business owners and, in turn, more income for his customers and more sales at his shop.

Devoting more land to commercial use would also mean a shift toward higher-density housing in other parts of the neighborhood. Ali hopes it will happen.

A block away from Juba Halal, in one of the oldest businesses in Mountain View, Ami Pyune also keeps her fingers crossed for more of that high-density development.

Duplexes and single-family homes are no friends to the laundromat business.

Founded more than 50 years ago, Surf Laundry & Dry Cleaning sits in an old concrete block building at the corner of North Bragaw and Mountain View Drive. At one time, it sat in the crook of the L-shaped Brewster’s Clothing & Footwear, bustling with customers who lived in nearby apartment buildings or pulled in off the Glenn Highway midway through summer RV trips.

Pyune, who now owns the neighborhood laundromat, came to recognize the repeat customers. Some grew up before her eyes.

The housing authority made repeat attempts to purchase it, hoping to redevelop the lot alongside the old Brewster’s property. Pyune refused to sell. 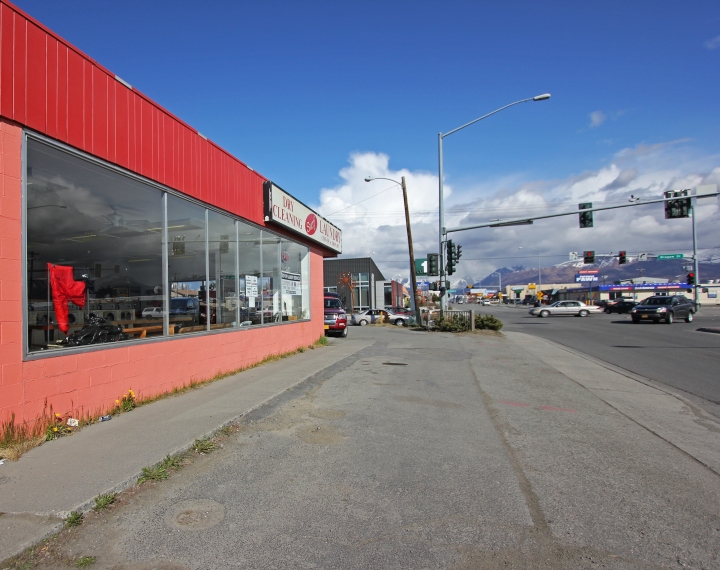 Surf Laundry occupies one of the oldest commercial buildings in Mountain View.

After working at the neighborhood business for nine years, she’s seen many changes to the old neighborhood. It’s cleaner now. It seems safer. After the credit union and the Anchorage Police Department substation went in across the street, there doesn’t seem to be as much drinking in the area, she said.

Still, Pyune’s business drooped. It’s been years since she took on any new employees. On any given afternoon, most of her machines sit idle. CIHA’s roomy new Mountain View developments come with their own washers and dryers, and the aging apartments that once housed many of her customers were replaced by more spacious arrangements.

“It’s nice to look at, the houses are nice and clean and all that,” she said, gazing out the front window of her all-but-empty laundromat one sunny spring day. “Business-wise? Not helping.”

She’s not alone. Just a few weeks ago, a few blocks west, Daniel Nasunin was concerned about going under.

Despite all the new development in the neighborhood, sales at Phattra Asian Market remained flat. About several years ago, a misunderstanding cost Nasunin his ability to accept food stamps, and he hadn’t been able to keep up since. Vegetables wilted, unsold, in their boxes. Bills piled up. Nasunin went back and forth with the U.S. Department of Agriculture’s Food and Nutrition Service, to no avail. The situation was dire.

Then, miraculously, after four years his application was reaccepted.

In April, he posted a bright orange sign in his window at the Mountain View Plaza—“Food stamps accepted.” He rearranged his store and restocked and over the first week alone, his sales more than doubled. News spread fast through word of mouth, and customers came pouring back in. 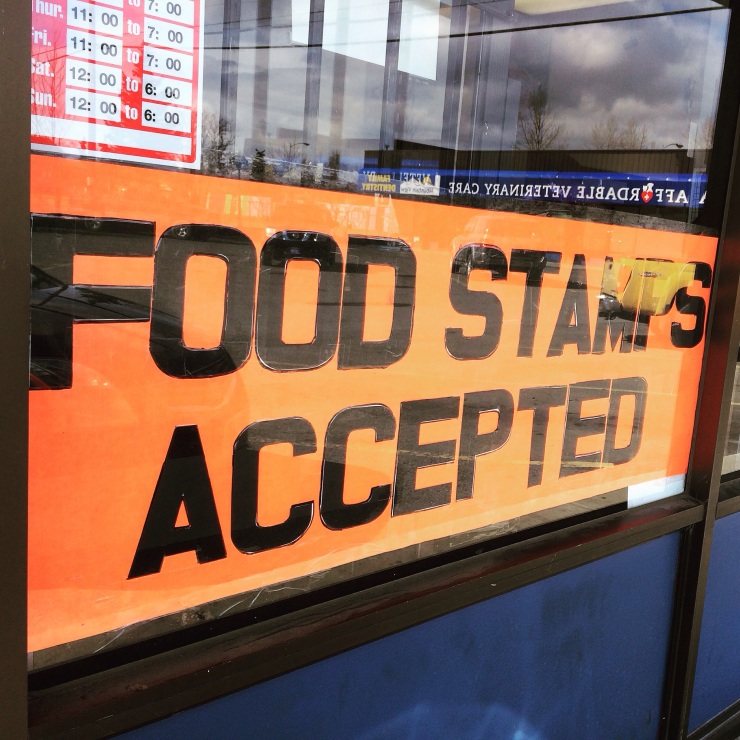 At Phattra Asian Market, the SNAP program has brought the biggest bump in business over the past year.

But, Nasunin said, “They are mostly my people.” His customers are predominantly Hmong, Thai and Laotian. He knows many of them.

The changes in the neighborhood landscape have yet to yield more business for his corner grocery. Across the street, CIHA and the Alaska Housing Finance Corporation are midway through the development of a new 70-unit housing project, and Nasunin watches the construction with detached interest. Maybe one day it will bring him customers, he said; maybe one day he will become busy enough to hire an employee.

For now, he mans his market alongside his wife and it thankful for the surge in food stamp sales.

Back at Juba Halal, a neighborhood business with a similarly niche customer base, Ali hopes more economic opportunity will bring the boost in sales he hopes for. For now, the market follows a predictable economic cycle: more customers at the beginning of the month, when paychecks and government assistance come through, and fewer over the final days when money runs short. It got him thinking.

“The housing construction is good for Mountain View, because there was a shortage,” Ali said. “But housing only does not do much.”

He pauses to answer the phone; help a customer; greet the mailman. Running a small business is grueling, time-consuming work. There are things he needs, like a bigger freezer for meat and a cooler for produce, he said, but that equipment isn’t cheap and the cost of shipping it to Alaska can be prohibitively expensive.

Meanwhile, the Islamic community in Anchorage continues to grow. With increased economic activity and commercial opportunity, Ali sees a chance to build. He dreams of one day opening a halal restaurant of his own. First, he needs more space and more customers with more money in their pockets.

“That’s why we’d love to see Anchorage being developed,” he said.

The CIHA construction throughout Mountain View leaves him hopeful. Before, tired old apartment buildings seemed like beacons of poverty and crime. People talked; investment lagged and appearances overshadowed potential. From his storefront on the neighborhood’s main road, Ali looked beyond all that.

“The neighborhood is not really that bad,” he said. “We can make better than what it is.”

Maybe, he said, the new housing projects will continue to attract new business and Mountain View will develop the buzzing commercial core he hopes for. More commerce could improve neighborhood safety, he said, “Because more people see something good happening.”

And then everyone would be a little better off.

Getting there takes work, but after six years of seven-day workweeks, few know that better than Ali. He already has a blueprint in his head.

We need more companies to invest and set up shop in Mountain View, he said. We need neighborhood infrastructure and nice paving and clean roads, more neighborhood watch groups and street lighting and police on the roads. We need more outreach programs and community festivals, he said, because that could bring neighbors together across cultures and generations.

Most importantly, though, the neighborhood needs the room to create its own economic opportunities. For Ali and his wife, that kind of growth holds the promise of a longtime dream for their young family—and their entire community.

“We’ve put in so many years, and this is our primary objective; to succeed,” he said. “We can’t quit.”

This story is the final part of an eight-part series sponsored by the Anchorage Community Land Trust. Click here for more information.