The congregation on Price Street has hosted a weekly food pantry for several years, serving about 100 families every Friday. There are elderly Alaskans and young adults and mothers with children in tow, and Rev. John Smith said most call Mountain View home.

At 4:30 p.m., the volunteers inside the sanctuary opened the side doors. The people outside made their way into the church in a line that snaked around the perimeter of the sanctuary and back towards the alter. Children played in the pews while parents waited to register and draw random numbers at a table near the front of the room. 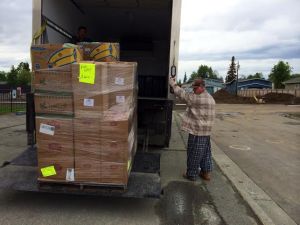 Around 4:45 p.m., a box truck from the Food Bank of Alaska pulled into the parking lot and volunteers began unloading the evening’s food. Hundreds of bottles of soda and milk, packaged hot cereal, boxes of apples and bananas, bags of salad mix and piles of bread were stacked on pallets outside the church. A crowd began to gather back in the parking lot.

People filed past the tables piled high with food, filling boxes and shopping bags and backpacks. Some pushed rolling suitcases; one man collected his food in a rucksack fashioned from a knotted flannel shirt.

It was nearly an hour before the final numbers were called and the last of the crowd moved past the tables. The pallets of food were empty and the parking lot had cleared of people. A handful of kids sat in the grass at neighboring Lyons Park and drank their milk.

Paula Green, a longtime food pantry volunteer who spent the evening distributing clusters of bananas and prepackaged vegetables, said the lines seem to keep growing. She said it’s part of the reason she continues to volunteer.

“I enjoy doing it, and there’s a great need,” she said.