Friday at the Club: Pizza, strobe lights and a motivational speech

At 9 p.m. Friday, the gym at the Mountain View Boys & Girls Club was packed with teens — they spilled into the game room and the sidewalk outside the building.

Many of them knew each other; more than a few said they’d been at the center all afternoon. JJ, 14, said she spent most summer days at the neighborhood Boys & Girls Club. But tonight was a little different than most.

There were steaming boxes of pizza stacked in piles on a folding table. Boys & Girls Club staff tucked blackout curtains over the teen room’s floor-to-ceiling windows and a DJ plugged his computer system into sets of giant speakers in the corners of the room. Jamon Morgan, New Direction’s founder, set up multicolored strobe lights.

Around 10 p.m., the crowd from the gym moved en masse into the teen room, piling into the overstuffed armchairs and worn couches that lined the walls. Before pizza and dancing came the talk. 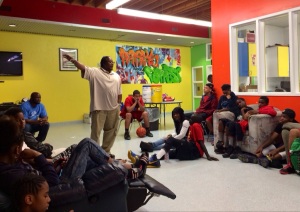 Morgan said he always tried to bring in a motivational speaker on teen nights. Friday’s speaker was Ben Briggs, a publisher and author who told the teens in the room they were smart, capable members of society. He told them to learn to communicate, to watch their language.

And as it turns out, he wasn’t the only speaker.

DJ Stewii, who stepped in on short notice to play for the evening, stood in front of the audience and delivered some spontaneous closing words.

Life changes, he said. Be prepared. He said he came to the Boys & Girls Club for a DJ gig; he never expected to deliver a speech to a roomful of teenagers.

“Yet, I find myself talking — standing in front of everybody here — spilling either my guts, my soul, my heart or my mind. Letting every one of you know that you guys have a chance,” Stewii said.

He said he grew up in Mountain View attending New Hope Baptist Church. He told the teens there was no limit to what they could accomplish.

“Pay attention to what you say, your actions can change everything,” he said.

The teens burst into applause.

After that, there was pizza and dancing and five-on-five basketball until 1 a.m.