Bryan Butcher, executive director of the Alaska Housing Finance Corporation, said the groundbreaking has been several years in the making.

“It’s so complicated to put together an affordable housing development like this,” he told attendees at Thursday’s event. “It really takes all hands on deck.”

Butcher said the project — which includes more than a dozen new buildings at the corner of Mountain View Drive and Porcupine Drive — involves about 10 layers of financing and cooperation from a litany of local organization, businesses and lawmakers. When work is complete, the development will hold 70 units of affordable housing and an on-site childcare center.

It’s an important addition to Anchorage’s housing stock: According to the United Way, the municipality needs 900 new homes every year. Fewer than 600 have been built annually since 2008.

Anchorage Mayor Dan Sullivan, who also spoke at the groundbreaking event, said Ridgeline Terrace is a vital step toward meeting the community’s housing needs. He applauded AHFC and its many partners for making the development a reality, and said it played into ongoing growth at the neighboring Glenn Square Shopping Center. 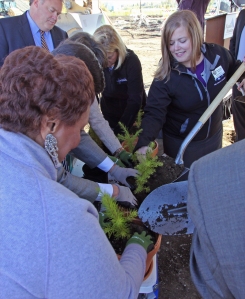 “The synergy of this project with what’s happened next door, what’s happened with the city investment in Mountain View — it’s all coming to fruition and it’s really a great thing for our community,” Sullivan said.

Butcher said the project, with its multifaceted financing and numerous community partners, could be the guinea pig for other, similar projects. If successful, he said Ridgeline Terrace could build momentum for new housing citywide.

There are several hurdles to overcome, Butcher said.

Vacancy rates are low. Demand is high. Land is increasingly scarce, and too expensive for many housing developments to pencil out.

“Many times, something commercial gets put in, which is great and beneficial to the community, but that’s the kind of challenge you have with affordable housing,” Butcher said. “You’re competing against everybody, and you’re trying to develop housing that people can afford.”

He said Ridgeline Terrace is a major milestone. Now, it’s a matter of looking ahead: Besides catching up to current demand, Butcher said developers needed to prepare for future growth.

“It’s just a long process of working at it,” he said.