Cup on the go 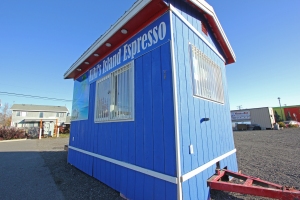 The business belongs to husband-and-wife team Iulai Mikaele and Baky Mikaele, who spent part of Wednesday afternoon working at the bright blue cart on the gravel lot near the corner of N. Kelvin Street. It’s not yet open — Baky Mikaele said they’re still waiting for a visit from the municipal health inspector. While the inspection was set to happen Monday, Mikaele said the inspector never came.

When the espresso stand is finally able to pass its inspection and go into business, it plans to cater to the early morning crowd. Baky Mikaele said she and her husband hope to open around 3 or 4 a.m. daily.

Kiki’s replaces Pin Ups Espresso, which was closed for most of the summer after opening for business in the spring. Pin Ups now operates out of a second stand along Commercial Drive.

An update posted to Resolution’s Facebook page Wednesday said the company is waiting on the final plans from the municipal building department. Then, construction. While the brewery originally planned on a five-barrel system, the floor load limit will restrict the building to a three-barrel setup, according to Wednesday’s update.

“All this means is more doing what we love: brewing beer!” the company wrote.