A gateway to Mountain View

What should a gateway to Mountain View look like?

The meeting was part of the long planning process for a proposed roundabout at the intersection of McCarrey Street and Mountain View Drive; currently at the 65 percent design phase. While the project is still only partially funded, it includes room for some kind of structure, sculpture, sign or other feature.

Local leaders see it as a chance to re-brand the neighborhood’s eastern entrance.

“I would like it to be, ‘No mystery about it, you’re in Mountain View now,’” said Don Crandall, former community council president.

Designers from Kinney Engineering and Earthscape will now work to incorporate their feedback into several potential construction concepts, which will be reviewed at another meeting early next year.

The consensus: The roundabout should include something that represents Mountain View’s celebrated diversity; something inviting; something bright and durable and unique.

Nobody liked the idea of recreating the metal roofline silhouette designs already installed throughout the neighborhood. Benches were deemed too dangerous for the middle of a roundabout; low-lying shrubbery and planter boxes too high-maintenance and prone to littering.

Instead, the neighborhood representatives embraced the idea of a gateway — something that would draw people in and invite them to keep coming back.

“We’ve been trying to get rid of those ancient ‘Welcome to Mountain View’ signs for a while, and replace them with something much nicer,” said Krishna, citing the inconspicuous wooden signs that currently sit at the corner of Commercial Drive to the west and Mountain View Drive and Davis Highway to the east.

The gateway could play on other cohesive elements already found throughout the neighborhood, Radhika suggested; a nod to the architectural renaissance of the past decade.

Madsen said Gruenberg is primarily concerned with safety, and asked that the future design not be an “attractive nuisance.”

“I think that it just adds that element of, ‘Oh, it’s families that live here.’ Because I think sometimes we don’t have that reputation,” she said.

M. Elise Huggins, a landscape architect with Earthscape, said designers would also take cues from existing neighborhood art to come up with several graphic proposals for the new gateway. Another meeting – and more discussion – is tentatively scheduled for January.

One thing is certain.

“I don’t want it to be like any other roundabout,” Crandall said. 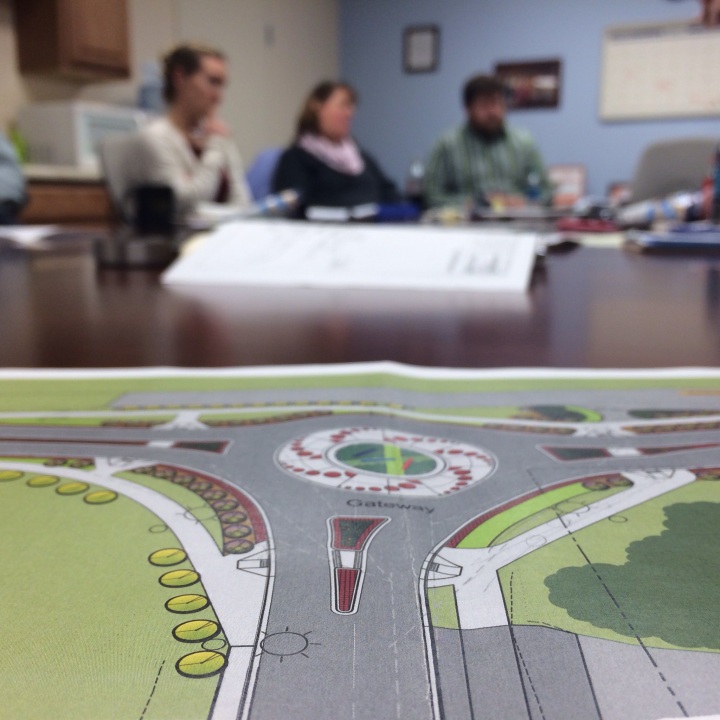