Clockwork Fire, a fledgling performance group dealing in flames and LED lights, put on a show for club members during the clubhouse Christmas party. While kids lined the room and waited to receive their gifts from the Santa Clause on a stage up front, performers swung multicolored LED orbs in mesmerizing patterns against a backdrop of Christmas lights.

The club’s youngest members were especially transfixed. Groups of grade-schoolers stopped to stare as they passed by.

“What’s that?” asked a curly haired boy, eyes locked on the swinging lights.

ClockWork Fire was founded over the summer by 25-year-old Andreas Mosesian and 23-year-old Akira Merrick, and now totals more than a dozen performers. They’ve put on shows at venues across Anchorage. They spin, toss and breath fire. Indoors, they work with different illumination. Wednesday’s group included Mosesian, Merrick, Kieran Adler and Brandon Yanoshek, who perform under the stage names Capt. Oben, Luna Dark, Aiden the Silent Phoenix and Yano the Aviator.

They’ve practiced at the Mountain View clubhouse for several months now, and Mosesian said the free performance was a way to give back. 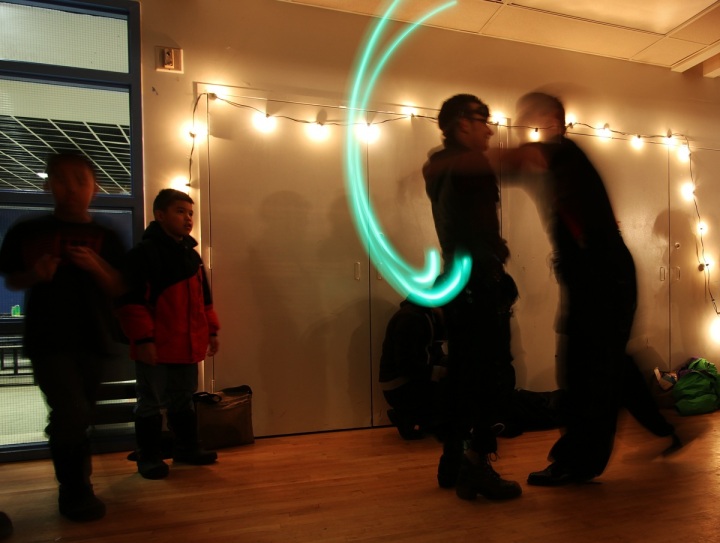