It’s hard not to notice the fence.

Set back from the street, it borders an empty lot on Mountain View Drive, spanning the space between the Mountain View Plaza and the corner Shell station. One of the largest murals in the neighborhood, the fence is covered in bright colors and handprints, names, hearts, peace symbols, smiley faces and other designs . “What do we need for peace?” is painted across it in giant letters readable from the road.

Many are familiar with the painting. Others — recent residents, and people just passing through the neighborhood — aren’t. Here’s how it got there.

The mural is the work of Anchorage artist Aurora Sidney-Ando and several hundred Mountain View residents. The lot, currently owned by the Anchorage Community Land Trust, is the former home of John’s Motel & RV Park.

After the homes were removed and the buildings were demolished several years ago, all that remained was the back fence. It was the perfect spot for some kind of art; There was already a mural on the opposite side. When Sidney-Ando approached ACLT with an idea for a mural on the Mountain View Drive side, the nonprofit was more than happy to work with her, said Executive Director Kirk Rose.

Her work transformed the back fence with a message of peace and unity.

“The piece was inspired by the idea that each one of us plays a part in creating our environment,” Sidney-Ando said. “I thought, if we created something beautiful together, we play a part in connecting with each other in positive ways and we leave a physical reminder of that positive interaction.”

The project involved bringing nearly a dozen fence panels to the 2011 Mountain View Street Fair, where several hundred residents left their own words and art on the wooden sections. Chanlyut, Credit Union 1 and Cook Inlet Housing Authority also contributed to the Mountain View Drive mural; a 160-foot-long symbol of community.

But it was never meant to last forever.

Eventually, the lot will be redeveloped and the fence may be torn down. Before that happens, though, it could be a canvas for some new design. Rose said the land trust would be open to new ideas for Mountain View Drive’s longest mural.

“It was meant to be sort of this evolving art piece,” he said. 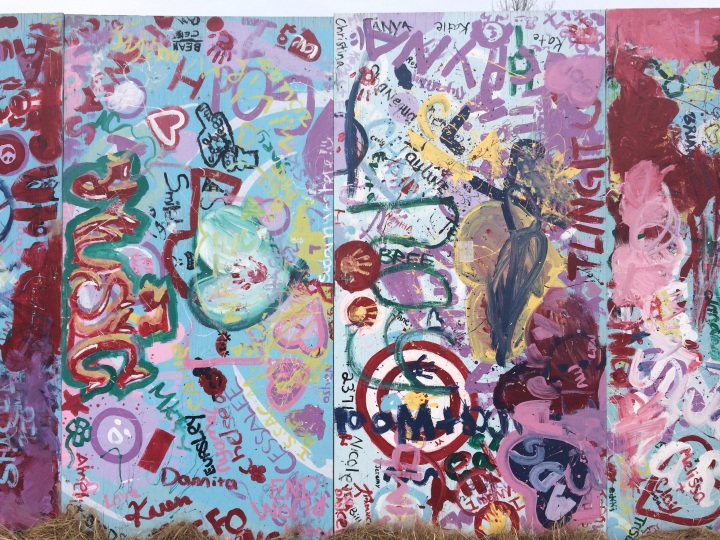 A section of the mural at 3543 Mountain View Dr.