On a sweltering Wednesday afternoon, Val Thomas Eppler was sitting at a bus stop on Mountain View Drive with his baseball cap pulled low, sweat dripping down the back of his neck and nowhere to go.

I asked him about his hat and he told me about his life — starting with the U.S. Army and the Vietnam War.

“They took me in Cambodia,” he says. “They dropped us off, and they had us doing things that we didn’t want to do. It fuckin’ hurt, excuse my language. But it hurt.” 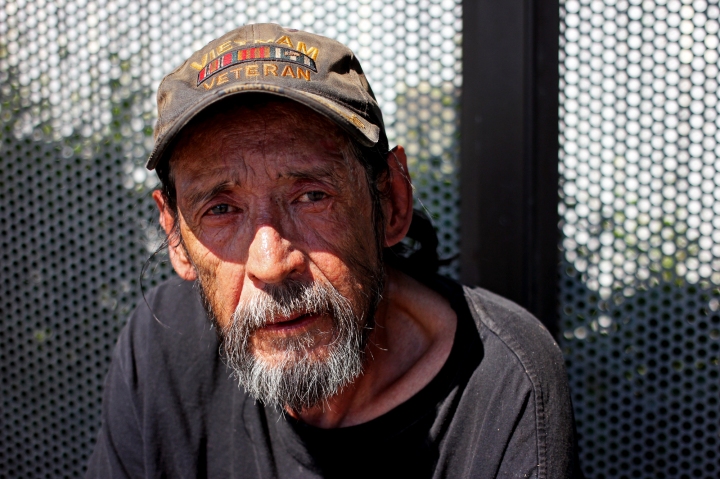 I ask how he came to be in Alaska.

He lived in Bethel, then Anchorage.

“I come in for veteran’s appointment, then I got drunk, and then I’ve been drunk ever since,” he says. “You know how that goes.”

Years passed. He became homeless in 2002.

“That’s how long I’ve been alone and lost,” he says. “The fuckin’ government don’t care about us veterans. That’s the bad shit, you know? But what the fuck. We’re veterans, we know how to live. Combat veterans. We can live through anything, ‘cause we had to back then.”

He tells me how he’s been sleeping under a tree in front of Clark Middle School. He tells me about his three 20-something sons out in Bethel; how they’re saving money to buy him a ticket home later this month.

“Them are my boys,” Eppler says. “They said, ‘Dad, come home, we need you.’ It’s fuckin’ nice to have somebody that needs you, right? So I’m just waiting.”