New technology, a shifting energy market and a hefty federal tax credit have combined to trigger a surge in solar power use across Anchorage.

You can find the slim, dark panels on homes from South Anchorage to Eagle River. They’re used to reduce electrical loads, supplement hot water systems and provide backup power supplies. And according to industry groups, businesses and developers, they’re more popular than ever before.

In Mountain View alone, approximately 500 solar panels will dot walls and roofs throughout the neighborhood by the end of the year.

Nearly all of them are part of projects developed by Cook Inlet Housing Authority. Mountain View Village V—a series of duplexes and multiplexes that sprang up around the neighborhood last year—is partially powered by 88 photovoltaic panels, according to CIHA Project Manager Shawn Holdridge. Ridgeline Terrace—a 70-unit development still under construction on Mountain View Drive—will use 84 solar thermal panels and 325 solar photovoltaic panels. 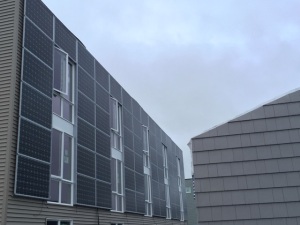 The photovoltaic systems work by running solar power through an inverter and back into the grid, dialing back customers’ overall power consumption and taking a chunk out of the final bill. The thermal system uses solar power to reduce the amount of natural gas needed to heat water. CIHA, which previously installed 56 solar thermal panels at its Coronado Park Senior Village facility in Eagle River, also plans on adding 12 solar thermal panels and 84 solar photovoltaic panels to another new housing development under construction in Russian Jack.

While it’s still too early to measure any results from the photovoltaic panels in Anchorage, the Eagle River building with the solar thermal panels sees sizable savings on its gas bill, Holdridge said.

The decision to incorporate renewable energy in residential projects is based on economics.

“It has to all pencil out,” said Sezy Gerow-Hanson, CIHA’s director of public and resident relations. “There’s a real cost that we’re taking upfront and we won’t see it pay off for many years down the road.”

With a single 285-watt panel costing around $350, solar power systems can take up to 15 years to pay for themselves, according to Lime Solar, the company that provided the panels for CIHA projects in Anchorage. But the price of solar power has decreased dramatically over the past decade, and for many projects, it finally makes sense.

Lime Solar owner Jesse Moe, an electrical engineer, said his company has seen a jump in business since first opening its doors in Mountain View in 2011. That was back when panels cost around $700 and produced around 185 watts each. Today, panels are half the price and nearly twice as powerful.

The soon-to-expire Solar Investment Tax Credit (SITC) is another major factor in the recent increase in solar power systems. The 30-percent tax break helps a lot of Anchorage projects pencil out, Moe said, and since the credit is set to expire at the end of 2016, developers are jumping to take advantage while there’s still time.

According to the Solar Energy Industries Association, solar-powered projects are on the rise nationwide. The residential market for photovoltaic power experienced record growth in the first quarter of 2015, the trade association reported, and the upward trend is only expected to continue.

Karl Solberg, Anchorage store manager for Renewable Energy Systems of Alaska (RES), said his company expects to be especially busy next year, just before the SITC expires; installing an estimated two or three solar panel systems per week in the summer. The business has seen solid growth this year, too.

Solberg said on-the-grid projects—primarily private homes—now account for 10 to 20 percent of his company’s Anchorage business. In Fairbanks, where builders can plug into Golden Valley Electric Association’s SNAP incentive program for solar power use, RES does even more work on the grid, Solberg said.

A small 3.2 kilowatt system costs approximately $16,000, the store manager said. The federal tax credit brings it down to around $11,200.

Spurred by the changing marketplace, the Alaska Housing Finance Corporation (AHFC) is working to further incorporate renewables, adding a renewable energy component to its energy-rating software. The public corporation, which funds housing projects across the state, also incentivizes renewable energy use through its Building Energy Efficiency Standards.

The new focus was triggered by rapidly developing technologies, according to John Anderson, AHFC’s director of research and rural development.

“The technology is fairly new for residential units,” Anderson said. “The savings-to-investment portion has never been there until now.”

Now that the corporation is beginning to see the lifecycle cost-benefit of renewable technology, it’s encouraging investment. A growing number of developers are giving it a try. Will the swing toward solar power last?

“Right now, the way that we’re looking at it is ‘Yes,’” Anderson said. “As long as it continues to pencil.”

While Alaska’s short winter days don’t provide much energy for solar panels, the long summer sunlight hours make up for it. New monocrystalline panels are especially effective in the cold, Solberg said, making April one of the best months for generating solar power in Alaska. And unlike utility-level renewable energy projects, home solar panels have instant results.

“When you do it on your home, you’re going to see the savings immediately,” Moe said.