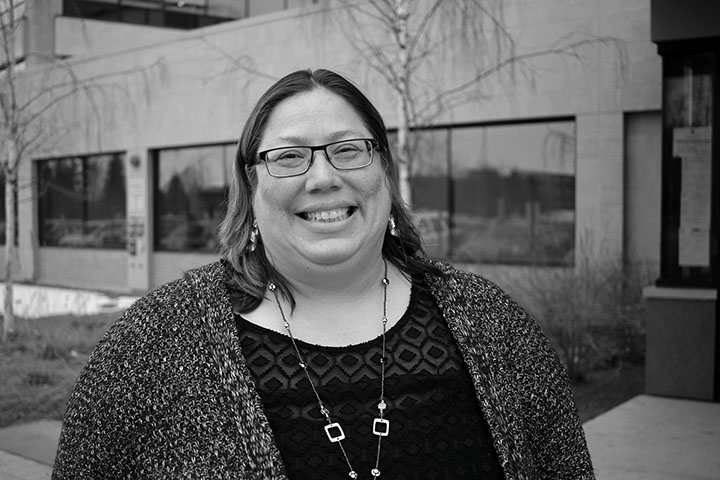 Mountain View resident Tasha Hotch rarely slows down. She’s the vice president of the Mountain View Community Council; wrapping up her MBA; involved for years with tribal politics. She works full-time administering a statewide community health aide program, volunteers for school and community causes and raises her teenage son. In 2018, the Alaska Journal of Commerce recognized her as one of Alaska’s Top 40 Under 40 — a distinction awarded for professional excellence and commitment to community. What drives her to make a difference in her neighborhood? We sat down for a conversation about leadership, empowerment and how to overcome some of the challenges facing our community today.

This interview has been edited for length and clarity.

How did you first come to live in Mountain View?

“I moved to Anchorage in 1999, in May right after school got out. I was attending UAS (University of Alaska Southeast) in Juneau … so I bought a $500 car and put it on the ferry. It was a super junkie car; had a hole in the gas tank so you couldn’t even fill up the gas tank all the way, and you started it with a screwdriver. I spent $200 on new tires and I drove it here. No radio, and that was probably the worst thing — I did this 18 hour drive straight through with no radio. Not recommended.

At that time, my mom and my sisters already lived in Anchorage. My mom owned a building in Mountain View on Klevin — she actually owned quite a few properties — so I moved into a 10-plex that she owned. I still had to pay rent, so it wasn’t charity, but it was nice not to have to go through a formal application process. That’s how I ended up in Mountain View.

It was a pretty rough go. When I was going to college in Southeast, I had to work and go to school at the same time. And I had these wonderful jobs in Southeast where I was making $21.50 an hour in the ‘90s, and then I moved here and was making $7.10 an hour at Napa Auto Parts. It was an interesting time in my life.”

At what point did you start getting involved with community issues and organizations, and what motivated you to take that step?

“I’ve always been really involved with community stuff. There was a point in time where I was trying to do that while I was trying to work two or three minimum wage jobs at a time — that made it challenging to do some things. Once I cut my jobs down to two, I looked into how to volunteer in schools, and really the first thing that I did in the neighborhood was volunteer at the Boys and Girls Club when my son was 3.

I loved the neighborhood, but I saw these kids without a lot of structure and not enough people to actually check in with them and how they’re doing. So I volunteered to show up and just be that other person.

And then just organizing neighborhood things: That’s something that I was really missing from back home (in Klukwan). So I started doing my neighborhood barbecues: In 2016, we had over 250 people come through our barbecue from the neighborhood. The year before that, it was closer to 200. I go all out — I have tug-of-war, I have gunny sack races, I do three-legged races, we do water balloon toss, we have a tetherball, we have an actual picnic table and chairs.

We just have fun!”

What long-term benefits do you see to this kind of involvement in your neighborhood?

“One of the things I had challenges with when I moved into my home was that since it sat vacant for so long and nobody was on that corner, and the house next to mine was also vacant, there was a lot of…I would just call it
inappropriate activity. I saw people selling drugs, prostitution; I would call it in and I would approach people who were lingering there. Feeling like this is my neighborhood and that’s not acceptable behavior, it was really important to me.

It’s reclaiming the neighborhood — residents feeling empowered to do stuff. When I first started trying to support community events, and just knocking on people’s doors, I felt like people didn’t want to open their doors because they weren’t sure who was on the other side. And I think the more that I do that and the more that I’m there … we don’t need to be afraid of our neighbors.

Even 10 years ago I was feeling really frustrated by the negative feedback I would get; ‘Why don’t you move out of Mountain View?’

Because I love it there.

I think we need to find ways to support each other.”

What do you see now as the largest challenges facing the neighborhood?

“I think getting out of the house — a lot of other neighborhoods have that same challenge. When we first moved into our house, we lived right across from Mountain View Elementary School, and very few kids were going to the
playground. And I would tell my son, ‘Go ask your friends to go, here, I’ll come out with you.’

And as we started utilizing those assets of the community, more people started coming out and using them, too. I think that’s important; we need to feel like this is ours.”

What advice would you give a neighbor looking to get involved in local politics or neighborhood leadership?

“It really starts with just being intentional, and figuring out what your interest is. Start going to those meetings and seeing what happens. Start with finding out where your passion is, and getting involved. There are a number of
different venues for that. I think we have a number of great professional associations in town that help.

Really, getting out of the house and doing stuff, volunteering.

It looks really overwhelming, but you don’t jump in like that: I tell people, find something that’s a one-hour commitment in a time frame that you’re willing to do, whether it’s one hour a week or one hour a month, then build up from there.”

“Part of it, for me, is that I feel like there are barriers to people like me: you’re a single parent, you’re a minority, you’re a woman. Even though people tell me that I can do anything I want or achieve anything, it really feels like that is not the case. So that’s what drives me. I don’t want my son to feel bad that he was raised by a single parent. I don’t want people to look down on him for that. I don’t want to feel like I could have done better if only I had applied myself.

I’ve been pushing more and more for people to feel like they can be self-sufficient. Right out of high school, I was going to school to be a diesel mechanic, so every once in a while I’ll post this thing on my Facebook and invite my lady friends to come over; ‘Let’s learn how to change a tire and check the oil in our car! Have you ever lit a flare? Do you know how to do it?’ For me, it’s about empowering people to feel like they’re not stuck. I would like to see this engaged group of people who feel like ‘We don’t need to settle.’

We usually host a game night at my house at least every other week. We like to do things where people are not playing on the internet or watching movies. Because I think sometimes we feel like we have to go at things alone, and we don’t. But the only way that you’re going to build those connections is to have actual interactions with people.”

This interview originally published in the Spring 2018 issue of Mountain View Post magazine.