There wasn’t a cloud in the sky Saturday morning as nearly 1,000 people prepared to race in the Faster Than a Falcon 5K. 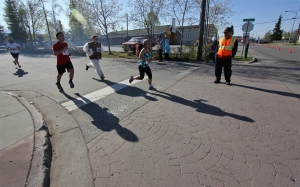 People waited at street corners to cheer on passing racers, and Bill Tsurnos peered into the sun and watched for his daughter, Sasha. 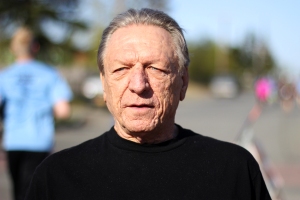 Tsurnos — who lives in Mountain View — leads Chanlyut, a reentry program for Alaskan men recovering from addiction, homelessness and incarceration. While Chanylut provided the post-race barbeque at the Boys & Girls Club, it wasn’t the only thing that brought Tsurnos to the race Saturday. He said his daughter is an avid runner, and he tries to cheer her on whenever she races.

Because she stuck with him as he spent more than 20 years in California prisons, he said. Because while he was going in and out of San Quentin and Folsom State Prison, he said his daughter grew from a little girl to a young lady to an adult with a job and a passion for running.

“She’s been with me the whole time,” Tsurnos said. “Never gave up on me.”

So, these days he never misses a chance to watch her run.