The blonde preschooler at the Alaska Museum of Science and Nature knew exactly what he wanted to see first Tuesday afternoon.

He made a beeline for a display case featuring a colorful array of shells, pressing his face against the glass. Kerri Jackson, the museum’s education director, said that’s the kind of return enthusiasm the museum hopes to foster.

“Really, I guess a long-term goal for me … is to make them lifelong learners, to ask questions about what’s around them and know that there’s really neat stuff that, if they just look into it a little deeper, could be really interesting,” she said.

From a former boat warehouse on N. Bragaw Street, the museum works to introduce Alaskan families to different science and natural history topics. 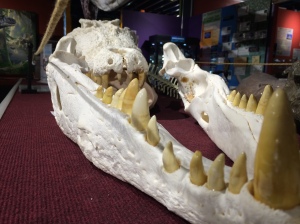 On the first day of the museum’s series of summer activities, kids’ voices echoed through the building. The museum — packed with fossils, geological and paleontological displays, interactive exhibits and more — is different than some.

“So often we hear people when they come in tell their kids, ‘Don’t touch, don’t touch,’ and we’re kind of the opposite in that,” Jackson said. “A lot of what you see around you, you can touch.”

With annual admission nearing 20,000 visitors, the museum’s education director said its programs have grown to cover subjects ranging from physics and electricity to dinosaurs and plant life. Jackson, who began teaching classes at the museum in 2006, said it conducts different outreach activities throughout Anchorage and tries to follow local school curriculum with its own exhibits.

She said she hopes to eventually expand the museum’s outreach efforts to rural communities. The museum currently offers workshops and classes primarily aimed at preschoolers through middle school students, but Jackson said she would like to see the offerings expand to include older students as well.

At the end of the day, she said the family museum aims to inspire curiosity in Alaskans of all ages. While it houses plenty of interest for adults, Jackson said there are particular moments when she knows it’s been a success with its younger visitors.

“When they leave, and they don’t want to leave, and when they say, ‘This is the best museum ever,'” she said. “And for some of the people in the neighborhood here, they’ve never been to a museum, or this is the first one they’ve ever gone to and they love it.”