The quest to build — and hire — in the same neighborhood

A year ago, the swath of land overlooking Glenn Square Mall was overgrown with brush and dotted with barrels of soil samples and “Private Property” signs; undeveloped and rich with potential. 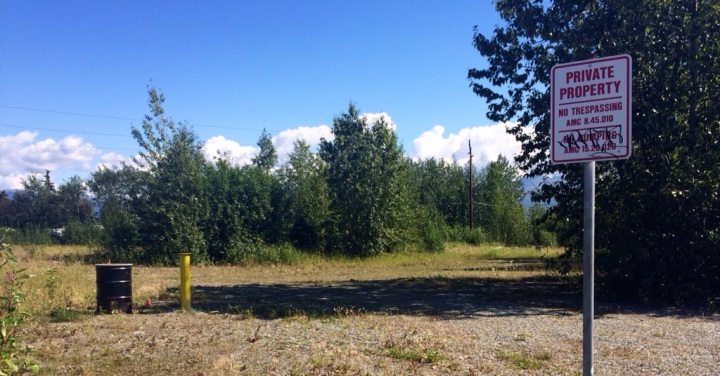 The future site of Ridgeline Terrace in early 2014.

From the sidewalk, there was a picture-perfect view of the Chugach Mountains. These days, the land is home to a bustling construction site. The brush has been replaced with multi-story residential buildings in various stages of development. Construction crews work to lay new foundations for more buildings along the eastern side of the lot, and the back of the property is dotted with heavy equipment. It’s the largest single development in Mountain View since Glenn Square itself sprung up nearly a decade ago. The completed complex will include 70 units of affordable housing and a community center with office space and on-site childcare services. Once it’s done, it’s set to bring hundreds of new residents to the neighborhood. The multimillion-dollar project packs a multi-pronged economic punch, from construction jobs to workforce housing. The development combines a job training program and and a focus on local hire. There are opportunities for several apprentices. Somewhat unexpectedly, though, finding people for those positions hasn’t been easy. Making Ridgeline Terrace a reality has taken time. It required layers of financing and a partnership between Alaska Housing Finance Corporation, Cook Inlet Housing Authority and two private developers. At a groundbreaking ceremony in September 2014, politicians and community leaders gathered to speak about the significance of the project. They praised its role in alleviating a citywide housing crunch and contributing to Mountain View’s economic upswing. Ridgeline Terrace could house people who work in Glenn Square, mused AHFC Executive Director Bryan Butcher. Its residents could help power the neighborhood’s own local economy. “This is very uniquely situated to be about as beneficial to a resident of Anchorage that lives here as it possibly can,” Butcher told attendees at the September ceremony. Before the doors ever open to new residents, though, Ridgeline Terrace aims to contribute to the neighborhood economy in another way. The local hire program, spearheaded by the project’s developers and general contractor, works to provide training and job opportunities to area residents. The program provides classroom time through the Alaska Craftsman Home Program and work at the Ridgeline Terrace construction site, and participants can hone trade skills like carpentry and plumbing.

Shawn Holdridge, a senior project manager for CIHA, said local hire at the Mountain View housing development comes with a few objectives. “The idea behind this is a couple things: One, try and get people in this community a job, get them experience, get them the classroom training, and then hope that they can go out and find a job just like that,” he said. “It’s to get people interested in the construction industry as well.” But hiring locals to build Ridgeline Terrace has been an ongoing process. Finding the right people for the job involves a couple steps. When one of the contractors on the jobsite needs more manpower, Holdridge, said, “They should basically be asking us to try to find somebody (through) local hire.” In turn, the project manager contacts Mike Tucker, lead instructor at Alaska Works Partnership – a nonprofit that connects Alaskans to educational and career opportunities in the trades. Then Tucker pores over a list of AWP trainees with Mountain View addresses, trying to find someone to fit the bill. “It hasn’t been easy at all,” he said. AWP, which has a training center at the Mountain View Service Center, conducts training programs and apprenticeship outreaches and aims to find young people who want a career in construction, Tucker said. He said recruiting neighborhood residents to fill apprenticeship positions at the big new housing development is a struggle. At first, there were more than 120 potential names on his list, but it’s a transient neighborhood, and many residents who had completed AWP training in the past had since moved out of Mountain View. Others, for one reason or another, just didn’t work out. Other people were simply employed elsewhere. In the construction industry, that’s not unusual, Holdridge said. Guys follow the work. And in Alaska, there’s plenty of it. According to a recently released employment report by the Anchorage Economic Development Corporation, Anchorage had around 7,000 construction industry jobs in March. Statewide, the Department of Labor and Workforce Development estimates, there are approximately 17,000 construction industry jobs every month. According to Alaska Construction Academies, a statewide workforce development partnership, it takes more than 1,000 new construction workers annually to meet Alaska’s growing demand. The local hire program at Ridgeline Terrace aims to connect Mountain View residents to that burgeoning career field. It started off slow. Following the September groundbreaking, there was a lot of site work to be done, Holdridge said, and no place to train an apprentice or put them onto a crew. The program is better suited to later in the construction process, when apprentices can work under carpenters or electricians or plumbers.

The winter was unusually snow-free, and crews made progress framing five buildings built on a conventional pile system that fall. Ridgeline Terrace was beginning to take shape. Two Mountain View men were brought on to work on the framing crew, Holdridge said. The first one left to take a job on the North Slope; the second moved on to a different job site when the framing work at Ridgeline Terrace was temporarily put on hold. At Alaska Works Partnership, Tucker toiled to find more people to fill the local apprenticeship positions. “I had a lot of trouble: I spent a few days at it and just kept striking out, striking out,” he said. “It seems like it’s just the natural deal. There’s a very high turnover rate with almost all of our participants.” Meanwhile, work at the housing development continued. By February, the first five structures had unfinished walls and roofs and front doors. The inner spaces were beginning to take shape; skeletal garages and kitchens and bedrooms and bathrooms. By the end of March, the project’s various apprentices had put in nearly 560 hours with the program, according to CIHA. Crews from EP Roofing took advantage of the balmy winter weather, working without heat or tents. In another nod to local employment, developers partnered with several Mountain View-area companies to build the housing complex. “Our goal is to hire as many local businesses as possible,” Holdridge said. EP Roofing, at the time, was located off Commercial Drive. Alaska Industrial Hardware, also off Commercial Drive, provided material and supplies. Unit Company, the project’s general contractor, is headquartered in nearby Ship Creek. Working with companies close to the construction site helped keep travel to a minimum and project costs lower, Holdridge said.

Work at Ridgeline Terrace in February 2015.

Sometimes, people would walk onto the job in hopes of finding work. That was the case with one neighborhood man, who came to the construction site and was put to work with one of the crews. A string of late arrivals and three warnings later, though, he was back out of a job. Hiring local businesses has so far proved easier than hiring local apprentices. By the end of April, spring work at Ridgeline Terrace was in full swing. Dozens of men in fluorescent green and orange safety gear kept busy framing new buildings, and the structures that went up over the winter moved into the final stages of construction. There are three-story, townhouse-style homes and single-story, fully accessible buildings for the development’s senior residents. They boast modern, energy-efficient designs and plenty of windows and solar panels along some of the western-facing walls. When the construction is complete, there will be final landscaping and site work. The whole project is scheduled for completion by the end of 2015, Holdridge said. Last spring, the lot outside Glenn Square was vacant. Today, it continues its transformation, reshaping the landscape of Mountain View Drive. Development at Ridgeline Terrace moves forward quickly. The local hire program isn’t quite so brisk. For Alaska Works’ lead instructor, finding neighborhood apprentices to work on the housing project remains difficult. “I thought it would be a piece of cake,” Tucker said. Instead, he’s found, the opportunities seem to outnumber the people.

This story is part of an eight-part series sponsored by the Anchorage Community Land Trust. Click here for more information.