In the middle of June, a new neighborhood market opened for business on Commercial Drive.

The Neighborhood Mini Mart and Smoke Shoppe moved into the space last occupied by The Smoke Shoppe, a standalone single-story building adjacent the Mountain View Car Wash. The building has been empty since February. Now the shelves are lined with tobacco products and assorted snacks and drinks, and the shop’s owners aim to expand. Standing behind the counter Monday afternoon, manager Hakm Al-Aswadi spoke about his family’s plans to fill empty shelves with groceries and other market products. 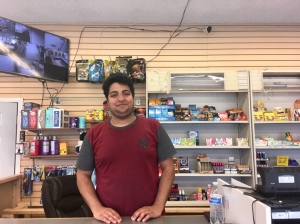 He works at the store with his brother and father, with whom he’d moved to Alaska from North Carolina earlier this year, he said. It was part of a bigger vision.

“We had belief that our future was in Alaska,” he said. “Everyone dreams about going to Alaska.”

Alaska turned out to be unlike any place Al-Aswadi had ever seen, he said. Originally from Yemen, he lived for several years in North Carolina, then drove across the United States with his father and brother and arrived in Anchorage in March. On Fourth Avenue, they wandered into a convenience store and discovered the owner was also from Yemen.

“We were surprised!” Al-Aswadi said. “Finally we found, in Alaska, Yemeni people.”

Eventually, they became business partners. They decided to open a market. Al-Aswadi’s family scouted far and wide for a place to open up shop; he drove through Palmer and Wasilla and all the way up to Fairbanks, he said. Finally they found the space on Commercial Drive. It fit the bill, he said.

They spruced it up and stocked some shelves. In the middle of June, they hung a new red sign over the front door. Three other separate “Open” signs illuminate the front windows. Customers are taking notice. Business hours are now 2 p.m. – 1 a.m. seven days a week, Al-Aswadi said.

“We’re planning for a good future here,” he said.