Have you seen us? Mountain View’s missing pets

Bentley, a tan and white chihuahua, is only about two months old and weighs just a few pounds. He went missing in Mountain View, according to a flier posted near the east end of Thompson Avenue, and there is a reward for his safe return. If you spot him, call 907-394-7116.

Toki, a larger cat with blue eyes and light fur, has been missing in Mountain View since June 19. Weighing about 10 pounds, Toki has a black face, paws and tail, with tufts of fur between his toes. Anyone who’s seen Toki can call 907-646-2345. 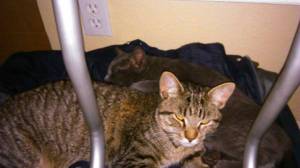 Maggie May is a black, gray and brown striped cat who disappeared in Mountain View June 18. She was last seen wearing a purple bejeweled collar with no tags; she a year old and weighs about nine pounds. Anyone who’s seen her can call 907-884-6483.